the new challengers for for the World Champions and the new Youth World Champion in 3-move (= openings are balloted) have been found.

Congratulations to the FID (Italy) and the Turkmenistan Draughts Federation.

Many thanks to the Irish Draughts Association (IDA) for hosting this events.

Bids for the 2011 Qualifiers and Youth World Championships in Checkers, this time in GAYP, ie Go As You Please (= opening moves can be choosed freely from the beginning) are still very much appreciated.

The qualifier 2010 was played in 3-move, ie the first 3 (half)moves were selecet by a ballot from 156 playable openings, and then the players played this openig twice, colors reversed in the 2nd game.

After a nail-baiting race between the GAYP World Champion Ron King and the multiple times Italian Dama World Champion Michele Borghetti, who played his very first major tournament in Checkers, King seemed to have won, as he played a 2-2 against Joe Schwartz of the USA, while Borghetti was beaten 3-1 by the later 3rd placed Grandmaster Shane McCosker of Northern Ireland. King now had 21 points and Borghetti 19, with McCosker on 18 and one round, or two games to go...

In the last round, King could not defeat McCosker and played two draws: 2-2.
Borghetti took both games from IM Michael Shabshai and the tie-breaker had to decide.
According to the WCDF rules, the Sonneborn/Berger system was applied, and Borghetti won by an edge.

Michele now has earned the right to challenge the title hoder, Alex Moiseyev (USA) in 2011 to a match of 40 games.
Bids to host this match are very much appreciated.

Michele also became a Grandmaster with this victory, but he is not the first Italian Grandmaster, as Paolo Faleo earned the title in 2008 by a Top 10 place at the WMSG in Beijing.

Only three women attended.
I personally hope that next time the number should increase.

A very close race between the young Toyeva and the expirienced former challenger Jan Mortimer from NewZealand was decided by their encounters against the 3rd palyer, American championesse Kim Willis.
Toyeva defeated her 7-1, but Mortimer only scored 6-2.

Congratulations to Hugmangul, who now has the right to challenge the current title holder, Amangul Durdyeva, also from Turkmenistan, who was invited by the WCDF to play in the general section this time.
Bids for this match over 20 games are also very much appreciated, but most likely a bid from Turkmenistan will be accepted by both players and the WCDF.

And here are the winners.... 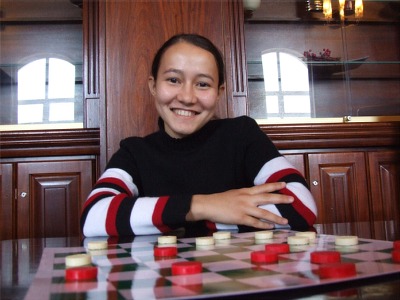